Last Saturday, parkruns all over the world were joining the celebrations for International Women’s Day by encouraging as many women as possible to participate and by asking as many park runners as possible to bring a female friend along. In partnership with the This Girl Can campaign, parkrun hopes to break down some of the barriers to taking part in sports that women in particular face and encourage them to come along to their first parkrun.

This week saw me completing my 120th parkrun and volunteering for the 8th time.  I began back in July 2016, when a female friend invited me to join her. I had run before, but not for several years, so was both excited and nervous about doing it again. Like many others, I had reservations because I didn’t really know what to expect – would I be too slow, too fat, wearing the wrong clothes, would I get lost, what should I do with my barcode?  But after my first parkrun, I knew I would be back. Once I had completed my 50th run, I decided that I would also volunteer from time to time.  This too is a wonderful experience.  It takes a team of around 30 dedicated volunteers to make York parkrun happen each week.  Please consider joining them sometime, there are lots of different roles available to suit everyone.  Not only is volunteering rewarding and fun, but it also provides a valuable insight into how parkrun works and makes you appreciate the hard work which goes into providing our free, weekly and timed event every Saturday.

Having been introduced myself by a female friend, I decided to do the same. I asked my daughter Jodie if she would like to come with me for her first ever parkrun and to my immense surprise she said yes. She is not a runner and I know she felt self-conscious and a bit out of place initially, but there she was at the start with me - and her lovely dog Tyrion. It was a lovely feeling to participate with her.  We walked much of it, ran when we wanted, chatted to each other and others and enjoyed the lovely sunny weather and unusually dry conditions. It was a fantastic experience for me to be further back than usual and to witness the cameraderie of the walkers and slower runners. How lovely that those people who lapped us also waved, greeted or even encouraged those of us still on our first lap. That is the true spirit, support and inclusiveness of parkrun in action, and what keeps us coming back week after week. 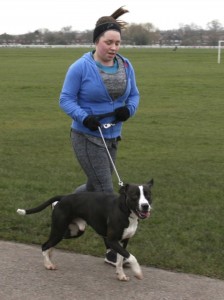 Despite the fact that we were gutted to finish after all of the biscuits had gone, we had a great time taking part.  Tyrion made so many friends whilst waiting at the start.  He was so excited to take part that, had it not been for his (short) lead he would have completed the course in a quarter of the time that we did.  Jodie did well to hold on to him and as such may now be the only person to wake up the day after her first parkrun with her shoulders aching more than her legs!

The results for this week show that 44 people completed their first ever Parkrun at York, of whom 29 were women. Well done to all of you! I hope you enjoyed it as much as we did and that you will be back again.