It's that time of year again where we start to think about our parkruns over Christmas, and we have a gift for you:

York parkrun will take place at 9am on Christmas morning.

Surely that's the best present! "But that's a Tuesday!" we hear you cry. parkrun HQ allow events to have an extra parkrun on Christmas day if they are willing and able, and as with previous years this has quite possibly been the best parkrun experience of the year. It will have everything you love about parkrun - hundreds of parkrunners, cheery volunteers, delicious cake, and that extra special Christmas feeling to start your day perfectly.

But wait, there's more. To blow away those New Years Eve calories:

We will also have a York parkrun on Tuesday 1st January at 9am.

Even better, parkrun HQ allow events to start a bit later in the morning and parkrunners can officially do two different events. It will be very possible to do York parkrun at 9am, then hop over to a parkrun with a 10:30 start and do that too. Can there be a better way to start the year? All of this is in addition to the usual Saturday morning parkruns and junior parkruns on the Sundays.

Sorry folks we've had to cancel due to ice

Ho ho ho! We're delighted to announce that as well as the usual Saturday morning delights at York parkrun, we will also have the pleasure of parkrun at 9am on both Christmas Day and New Years Day. If Santa brought you any new running kit then why not stick it on and join us? Only get a lump of coal for Christmas this year? Not to worry, at parkrun everyone's on the 'nice' list. Do you fancy being a good elf? Great, let us know and come and volunteer on either (or both) of those days.

For even more fun, on New Years Day you are allowed to do two parkruns, so you could run York, hop on your sleigh to somewhere else, and do another one. Oh my! Check out the parkrun Christmas Compendium to see what your options are.

We can't wait to see you!

Please note that York parkrun will go ahead this Saturday, 24th June but on a different course due to an event taking place on our usual location.

We are still on the Knavesmire but at the other end towards The Mount.  See the image below for details.  It will be a 3 1/2 lap course, all on grass.  If you have any queries please get in touch via our Facebook page or email to yorkoffice@parkrun.com

There will be a lot of vehicles at the Cycle Rally event on the Knavesmire so please avoid using the usual entrance points from Knavesmire Rd.

These are the dates that we currently know York parkrun will be cancelled in 2017 (due to the horse racing or other events):-

The dates will also appear as cancellations on the volunteer roster as we get nearer to them.

There is a possibility that there will be further ones, if so we will update this page.

We all love parkrunning as much as possible, but there will be no York parkrun on New Years Day this year. As the 1st January is a Sunday the lovely Knavesmire junior parkrun will be running instead.

If you can't imagine New Years Day without a 5km parkrun then check out the official list of who's on and who's off: http://www.parkrun.org.uk/christmas-compendium/ Make sure you check the start times too as they're not all 9:00 on Sunday.

Please note we have the following cancellations in 2016 due to racing or other events at the Knavesmire.  There may also be some others, we will update this list if and when we find out about them.

The current cancellations for when the racecourse is being used for something else is as follows:-

Ahh, March 21st, officially spring no matter how you determine it. Winter is finally behind us and we enter a time of glorious mornings and gentle spring breezes. Unfortunately no one told the parkrun Weather Fairies about this so they provided the usual cold and wind. That didn't stop York parkrunners however, as 381 of you took to the Knavesmire backed up by an army of volunteers, all looking for your Saturday morning running fix.

Before the run we tried out a new briefing location to try and make it more audible to everyone. All of the runners were gathered around the sand mountain near the Cherry Lane entrance, and initial feedback about the change has been positive. Thank you to everybody for listening!

The run itself was a blustery one, and in general finishing times were a little slower than normal. That's not to say there weren't some impressive PBs however. In particular Cecilia, David, Alfie and Henry Pipe have 279 runs between them, and all four of them set a shiny new personal best. What a perfect family day out that was!

We had a lot of pacers for you this weekend too, in part due to the fact that the Thirsk 10 Miles and East Hull 20 Miles races were taking place the following day. Many thanks to all of them for dragging people round, and well done if you kept up with (or beat) them. 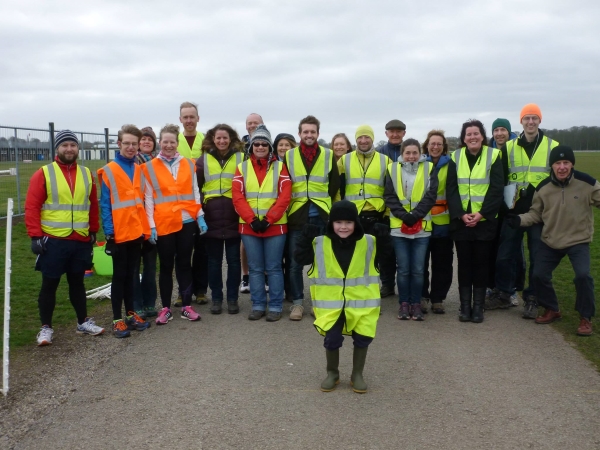 Most of the wonderful volunteers - thanks guys!

York parkrun is ideal for dogs, with it's good quality flat tarmac, few tight turns, and a huge open field to run on afterwards if they still have energy to burn. Please bear the following safety principles in mind however:

The official parkrun policy on dogs can be found here.

As ever, a picture illustrates the point quite well: 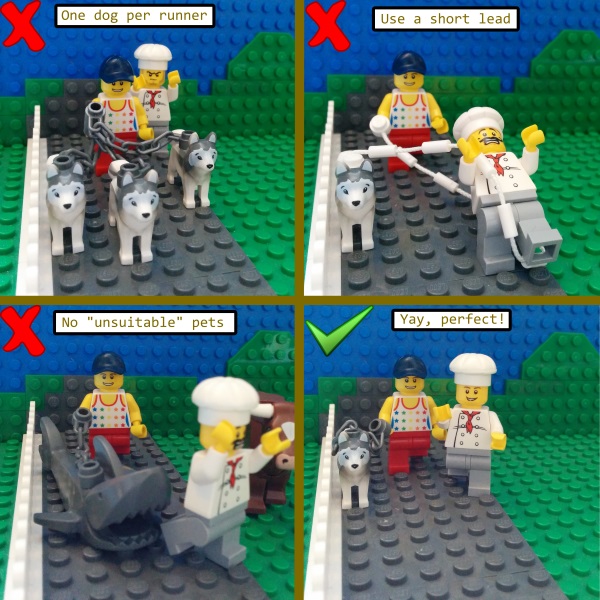 Each week we get asked about t-shirts. parkrun HQ are working with Tribesports to ensure that everyone who is due one will receive one, but there's a lot to make! The current estimation is that they will start emailing recipients of them in June and you should receive them shortly afterwards. No one will miss out, so thank you for your patience.

It's coming up to that time of year again when other people want to use our course on Saturday mornings. This is mostly for horse racing events, but the odd other event does come up too, such as the Tour de Yorkshire. All of the dates have been sent to parkrun HQ, and here's the list as it stands at the moment:

Ok, so that's a lot of cancellations, but every cloud has a silver lining for it gives us plenty of opportunity for parkrun tourism. Our newest parkrun neighbour as of yesterday is Wetherby parkrun, so you could give them a try, or choose from hundreds of other events around the world.

Finally, here's the statistics that you all love so much!

This week there were 381 runners, of whom 51 were first timers and 59 recorded new Personal Bests. Representatives of 35 different athletics clubs took part.

Today's full results and a complete event history can be found on the York parkrun Results Page.

“We love them, they’re our favorite part of parkrun” - said no parkrunner ever. So much effort goes into the briefing and we do it every week, but why do we bother, you’ve heard it dozens of times before, right? What is truly amazing is that of the 439 runners we had at York on Saturday, 63 had never ran our parkrun before, and 33 of them had never done any parkrun ever. They don’t know to only cross the funnel once to avoid messing up results, they don’t know that there are dog walkers around, they don’t know to run anti-clockwise around the track. We also reiterate things like dog safety, rules about under 11s, thank volunteers, congratulate people on milestone runs, and so on. All useful and important stuff.

We know that with such a lot of runners our briefings struggle to be heard at the front, at the back, and sometimes all the bits in between too. We have a pretty awesome megaphone (usually), but there’s now so many runners spread over a long path that it has become virtually inaudible. That’s why this week we’re going to try something a bit different. We’re going to gather everyone around us at that big square near the Cherry Lane entrance, and stand on one of the big sand mountains to make the sound carry across everyone. Hopefully being higher up and with everyone closer together the briefing will once again become useful. You’ll then be led to the start line (a staggering 80 metres, so pace yourselves) ready for the off.

We can’t pull this off alone, we need your help as well please. Chattering is practically mandatory before, during and after parkrun, but if you could listen attentively during the briefing that would be splendid. You might have heard it all before, but the person next to you might be hanging off our every word.

Thank you, and see you on Saturday. 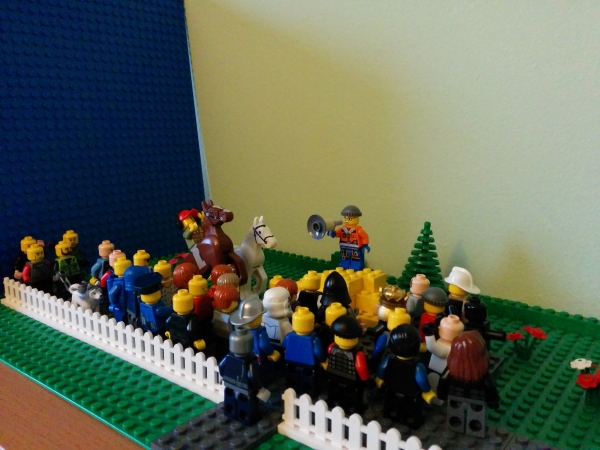 Everything is awesome when you can hear the briefing.